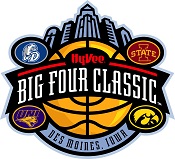 Northern Iowa coach Ben Jacobson says the Panthers have focused on defense this week as they get set to play fifth ranked Iowa State in the Big Four Classic on Saturday.

Jacobson says the Cyclones are especially good in transition.

“There might not be one team better than Iowa State in transition offense and if there is I am not sure who that team would be”, said Jacobson. “They are the best or one of the two or three best in the country in terms of transition offense. They just get the ball on top of you so fast.”

The Panthers are 6-3 and take on a Cyclone team that is 9-0 under first year coach Steve Prohm.

Iowa plays Drake in the first game of the doubleheader at Wells Fargo Arena.