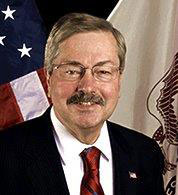 One of Republican Governor Terry Branstad’s most-tenured aides predicts Branstad will serve out his current term, which is term number six. Dave Roederer has served Branstad in a variety of roles and is currently Branstad’s budget director.

“Emphatically, no-question, no-doubt, I don’t even have an ounce of me that says he will not fill out his term,” Roederer says. “He will completely this term, no question about that.”

The 69-year-old Branstad became the nation’s longest-serving governor this past week. Some have speculated Branstad might resign soon, giving Lieutenant Governor Kim Reynolds some time to serve as governor, so she could seek re-election in 2018. Branstad has made it clear he wants to see Reynolds as his successor, but Branstad hasn’t ruled out running for relection himself in 2018. Roederer suggests the idea of seeking term number seven isn’t on Branstad’s radar yet.

“Whether or not he runs next term, I don’t think he’s even thought about that,” Roederer says. “And it’s way, way too early with three years left.”

Branstad won his sixth term as governor in 2014. Roederer made his comments during taping of an “Iowa Press” program that will air on Iowa Public Television Christmas Day.