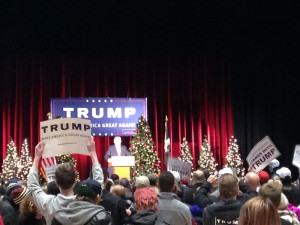 Republican presidential candidate Donald Trump is warning that the federal budget deal that cleared the Republican-led congress this week may send the country into recession.

“The word bubble. Remember the word bubble. You heard it here first,” Trump said during an afternoon campaign rally in eastern Iowa. “I mean, I don’t want to sound rude, but I hope if it explodes, it’s going to be now rather than two months into another administration because, honestly, you’ve got yourself problems.”

Trump spoke to a crowd of about 1200 in Cedar Rapids. The audience laughed as Trump ridiculed Republicans who voted for the budget deal.

“‘Do you vote for this horrible budget that’s going to put us further in debt?'” Trump asked from the stage, suggesting Republicans in congress would respond: “I do. I swear I do.” Trump concluded with this promise: “That will never happen with Trump,” and the crowd cheered.

“Now we’ve got to really be smart because we don’t have money anymore,” Trump said. “You know we’re a poor nation. We’re a debtor nation and we could be on a bubble and that bubbles going to crash and it’s not going to be a pretty picture.”

Trump, who was on stage for an hour and 15 minutes, was joined by his son, Don, and some of his grandchildren.  Trump talked briefly about some of his rivals for the Republican presidential nomination, assigning the label “good guy Ted” to Texas Senator Ted Cruz, but suggesting Cruz, Florida Senator Marco Rubio and “others” are late to join his call for a wall along the southern U.S. border.

Trump’s harshest words, however, were for former Florida Governor Jeb Bush. Trump called Bush “close to incompetent” for the way Bush has waged his campaign.

“I don’t want Jeb Bush’s endorsement, honest,” Trump said, as some in the crowd responded with laughter. “It doesn’t mean anything. He’s not tough. He’s not smart.”

Dan Meloan of Cedar Rapids, who attended Trump’s rally, said he’s on the Trump “bandwagon” partly because he believes Trump can “protect the country.”

“I’m tired of the mealy-mouthed conversations we get in the government and he talks some straight stuff that some people like and some people don’t,” Meloan said. “But I’m interested.”

Gunther Frank of Cedar Rapids is “definitely” attending the Caucuses and has narrowed his choice down to two candidates. One of them is Trump.

“I think he’s brought up a lot of issues that needed to be talked about that have been bothering people and he has the guts to be politically incorrect in areas where the citizens are generally politically incorrect,” Frank said. “Secondarily, I like the fact that he is not owned by a benefactor that expects something of him if he were to be successful.”

About 50 protesters gathered across the street from the auditorium where Trump spoke. Erica Zito of Cedar Rapids used the word “xenophobic” to describe Trump’s call to temporarily block Muslims from entering the country.

“That’s very, very disturbing to me and very scary,” Zito said, “and scary that there are so many people out there supporting him.”

Hassan Selim, the Imam at the Islamic Center of Cedar Rapids, was there with a sign.

“My message is I’m a Muslim, I’m an American and I’m proud,” he said. “I’m a naturalized citizen, but I’m just as American as every other citizen here.”