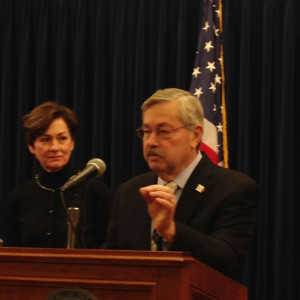 “I got into this race to put forward a plan to win a war we cannot afford to lose and to turn back the tide of isolationism that was rising in our party,” Graham said in a video posted this morning on his campaign website. “I believe we made enormous progress in this effort.”
During an interview on CNN, Graham said his candidacy “hit a wall” and he suspended his campaign this morning. Iowa Governor Terry Branstad told reporters this morning that Graham “made a huge commitment” to protect Americans.

“Nobody has probably gone more to Iraq and Afghanistan than he has or is more knowledgable on these issues,” Branstad said during his weekly news conference.

“I enjoyed very much the interaction I had with him. I remember he called me and said he learned two things about Iowa: You need to love Jesus and ethanol,” Branstad said and Lieutenant Governor Kim Reynolds, who was standing alongside Branstad, laughed as Branstad continued: “So that just kind of shows you something about Lindsey Graham.”

Graham launched his campaign in June and spent the majority of his time campaigning in New Hampshire. He was never able to garner enough support in public opinion polls to be invited on the main stage during the televised candidate debates.