You are here: Home / Military / Huckabee says Graham’s voice on national security will be missed 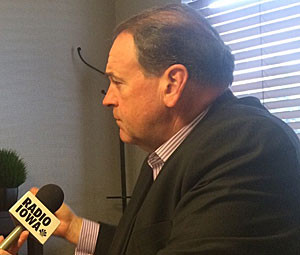 Republican presidential candidate Mike Huckabee says Lindsey Graham — who exited the race today  — is among the few people who understand the danger radical Islam poses to the country.

Graham, a South Carolina senator who retired from his military career this year, says he entered the race to counter the “isolationist” rhetoric he was hearing in the campaign. Huckabee says Graham brought a “much-needed” message about the reality of the conflict.

“I think his has been a welcome and an important voice to remind us that we are at war with radical Islam and he has made that the centerpiece of his campaign,” Huckabee says. “I think it’s very evident his voice in that will be missed.”

Huckabee started a two-day campaign swing through Iowa with a stop at the Iowa Veterans Home in Marshalltown late this morning.

“We have a moral obligation to the veterans of this country,” Huckabee told reporters. “There’s no other group of citizens to whom we owe our freedom. To our veterans we owe our very existence and we owe every free breath of air we take.”

Huckabee will campaign in New Hampton, Cresco, Osage, Northwood and Forest City tomorrow. Huckabee is the lone Republican presidential candidate to schedule campaign events in Iowa this week. Tonight, Democratic candidate Bernie Sanders will kick off a three-day tour with a town hall meeting in Sioux City. Hillary Clinton is due in Iowa this week, too, and she’ll start by visiting Keota Tuesday. Students there started an online campaign to try to get a presidential candidate to visit their school and Clinton is the first to stop.