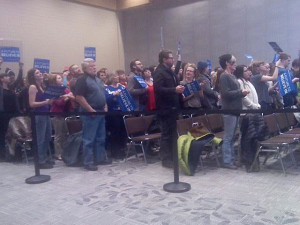 A fervent crowd of more than 1,100 supporters turned out to cheer Democratic presidential candidate Bernie Sanders in Sioux City tonight.

Sanders took a shot at rival Hillary Clinton, who said in response to a question at last weekend’s debate that “everybody” should love her, including corporate America. Sanders told the Sioux City crowd he doesn’t need Wall Street’s love.

Sanders spoke for more than an hour, drawing a huge response for saying he’d let states decide whether marijuana should be legal.

“I do find it interesting that millions of people over the last several decades have gotten police records for possessing marijuana,” Sanders said, “but not one CEO of a Wall Street bank has gotten a criminal record for destroying the American economy.”

Sanders also talked about foreign policy, promising as president he’d build coalitions that would ensure ground troops from Muslim countries rather than from the U.S. respond to the threat of ISIS.

“What I will not do is get the United States of America into a perpetual war in the Middle East,” Sanders said.