You are here: Home / News / Three Keota students celebrate as Clinton arrives at their school 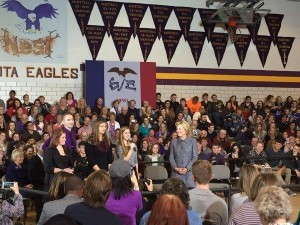 The three Keota students who started an online campaign to try to get presidential candidates to speak at their school were at center stage today when Hillary Clinton walked in their high school gym moments ago.

Schuyler Snakenberg is the sociology teacher who challenged his students to come up with something that would improve society.

“It’s a huge deal for the community, obviously for these young women,” he says. “I think this has been a prime example of the democratic process, showing how a grassroots movement can attract national attention.”

Abby Schulte is a senior at Keota who helped launch the #KeotaHopesforHillary hashtag.

“This is an honor. It’s an amazing experience. It is something that we’re going to remember for the rest of our lives. It’s an absolutely amazing feeling.”

Schulte plans to attend Simpson College next year, to study political science and, yes, she plans to work in politics as an adult. Megan Adam was at a Clinton campaign event in Coralville last month where she asked Clinton to make the trip to Keota. Adam says she was “dumbfounded” when Clinton replied that she was coming. Today is a bit surreal, according to Adam.

“This is an incredible experience. Just to meet someone of this magnitude, I mean to have the opportunity to sit down and talk to her is crazy and awesome,” Adam says. “Like I never thought going into my senior that this would ever happen to me. I never, ever thought all these people would come tout to see something that we’ve done.”

“Definitely the sky’s the limit for us,” she says. “I think we can do anything.”

After the Caucuses, the next project the girls plan to launch is an online campaign to lobby state legislators to increase state taxpayer support of Iowa’s public schools.