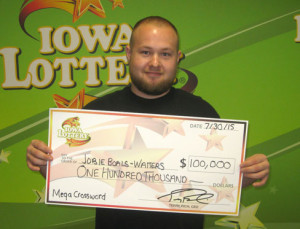 A Des Moines man is facing a charge of underage gambling after he collected a $100,000 Iowa Lottery prize this summer.

“At the time, he provided us with information and everything seemed to be on the up and up and the prize was claimed,” Neubauer said.

While it’s illegal for someone under 21 to purchase an Iowa Lottery ticket, a person under 21 can claim a prize if the ticket was purchased legally by someone who is of age. Boals-Watters claimed a co-worker bought his ticket. A few days after he claimed the prize, an anonymous tip to Crime Stoppers led the Iowa Lottery to further investigate Boals-Watters’ story.

“One of the things we did was pull the security camera footage from the store when the ticket was purchased and indeed, we determined that Jobie Boals-Watters had been the one who purchased the winning ticket,” Neubauer said. “He was only 20 at the time, which meant the purchase was not legal, which meant the winning ticket was invalid.” Boals-Watter has pleaded not guilty to the charge of underage gambling. A hearing in the case is scheduled for January 13 in Polk County District Court.

“The lottery will be seeking to have the prize money returned to us through the legal process,” Neubauer said. Boals-Watters stood to collect $70,000 after taxes. The ticket was purchased at Super Quick Foods on Southeast 30th Street in Des Moines. That store is now facing a suspension from the Iowa Lottery for failing to ID Boals-Watters when he allegedly bought the ticket.

“Under the lottery’s administrative rules, a store’s license to sell lottery products will be suspended for one week for a first time violation of an underage sale,” Neubauer said. According to Neubauer, underage violations relating to lottery products are relatively rare in Iowa.

“This is an unusual case. The good news is that underage violations are few and far between here in Iowa,” Neubauer said. “We think that we have a retail environment that functions really well and, by and large, our retailers do a good job of checking IDs and making sure they’re complying with the law.”