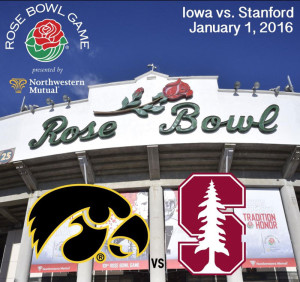 Thousands of Iowa football fans will be heading to California next week and they can expect tight security at the Rose Bowl game and parade.

Pasadena Police Chief Phillip Sanchez talked about the increased enforcement for the 127th Rose Parade at a news conference Tuesday.

“We’ll have more than two dozen undercover officers who will be patrolling the parade route and more than two dozen bomb-dog teams,” Sanchez said. Dozens of security cameras will be in place as well, according to Sanchez. More than 700,000 people are expected to line the route of the Rose Parade on New Year’s Day morning.

The Rose Bowl, featuring Iowa against Stanford, will kickoff later that afternoon. Homeland Security Special Agent Mark Selby said they’ll be deploying an “unprecedented volume of resources and technologies” for both the parade and game.

“In the wake of the tragedy two weeks ago in San Bernadino, I really don’t think anybody needs to be reminded of the neccessity and the vital importance of security,” Selby said. “But I think it’s important to realize these preparations started more than a year ago.”

U.S. Customs and Border Protection will patrol the game and parade from the sky. Fans attending the game will be provided with clear bags for their personal belongings as they enter the stadium.

The University of Iowa received over 54,000 ticket requests from fans hoping to attend the game. The Iowa Hawkeyes last played in the Rose Bowl in 1991.