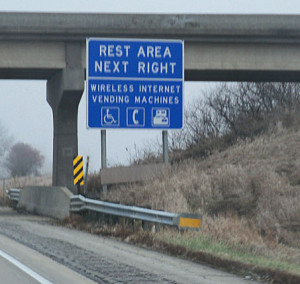 They’ve been around for 50 years, but Iowa’s network of highway rest areas is more popular now than ever.

In recent years the comfort stops have taken on the look and feel of truck stops. Iowa now has 38, fully-equipped with bathrooms, vending machines, internet access and picnic areas.

During certain hours of the day they’re crowded with many more 18-wheelers than cars. Department of Transportation rest area manager Dennis Mabie.

“We put in bigger truck parking lots and the truckers use them. It has kind of a build it and they will come thing,” Mabbie says in reference to the famous movie line. But it’s still not enough as you can see at the I-80 rest area near Mitchellville the scarcity of truck parking spaces is so severe that semis have pulled up alongside the entrance and exit ramps; even on the shoulders of the interstate.

Transportation planner Phil Mescher is monitoring the spillover. “We definitely have an increase in freight traffic and it’s projected to continue to grow at an exponential rate,” Mescher says. No one is more upset by the parking squeeze than the truckers themselves; by law, they have to pull off the road and rest after 11 hours.

Kevin Stewart is hauling an oversized load to Atlanta, and spent the night sleeping in his rig, blocking spaces in the automobile area. “Because I parked back there in the curve and I was afraid somebody was going to come and bang on my door and be pissed because I’m in the approach way,” Stewart explains. “That is technically kind of a bad thing but you got to do what you got to do.”

Commercial truck stops are just as crowded as public rest areas according to Ken Sayers who just woke up to resume his journey to Salt Lake City. “Trying to find a parking spot at truck stops is miserable and it’s unsafe. The way it is, I have to spend at least the last hour of the day looking for some place,” Sayers explains. A partial solution is to let drivers know in real-time where open spaces are. Iowa is sharing a federal grant with other Midwest states to implement a system using digital road signs, smart phone applications and other technologies so drivers can locate available spaces in advance.

Steve Mc Menamin an administrator with the DOT says there’s rarely enough space. “We have 16 million people that use the rest areas every year. We found that almost every rest area at some point during the day is 120 to 150 to 200 percent capacity, yea, that’s a problem,” McMenamin says. Iowa tends to be more lenient on truckers that invent parking places at rest areas, but State Trooper Jim Trainor says it becomes a safety issue when they park alongside the interstate.

“It’s kind of a Catch 22 because if you tell them move they could be a tired fatigued driver,” Trainor says. “We do the best we can if they start getting backed up too far on the interstate well knock on the door and tell them to move on and tell them to go to the next truck stop and kind of guide them on their way.” Transportation planners say an alert system that points drivers to open spaces could save millions of dollars for the state and trucking industry, including expenses now wasted on travel time, diesel fuel, road damage, and accidents related to drowsiness.

Phil Mescher says the DOT will soon be enlisting private truck stops as partners, but they have to be careful so that it’s not oversight of government or anything like that. The new parking information system will initially focus on Interstate 80 from Des Moines to Davenport, a stretch that now has more than 2,300 parking spots for semis.