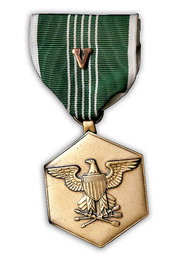 Two former soldiers with the Iowa National Guard were presented with Army Commendation Medals for Valor in a ceremony Wednesday in Waterloo.

Guard spokesman Colonel Greg Hapgood says Sergeant Justin Schmitt of Nashua and Specialist Brian Swedberg of Prairie City were part of Headquarters Company, 1st Battalion, 133rd Infantry, based in Waterloo. “Both of these young men were involved in situations in Afghanistan, firefights with enemy combatants,” Hapgood said. “Both occasions…we’re talking about meeting forces that may’ve been somewhat larger than the particular team or squad that these individuals were on.”

The two former soldiers were awarded the medals for actions they took in separate incidents in Afghanistan in 2011. “You’re talking about significant personal risk and sacrifice involved, in direct combat with the enemy,” Hapgood said.

Neither of the former soldiers were injured in the incidents. Hapgood noted the actions taken by Schmitt and Swedberg helped ensure all of the soldiers in their guard unit made it home safe. Schmitt’s military service ended in September 2012. Swedberg left the Iowa National Guard in April 2013.