You are here: Home / Sports / Hawkeyes will mix work with celebration of Christmas 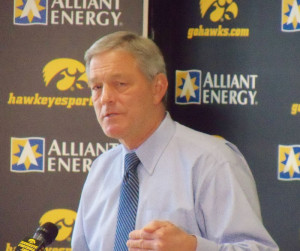 The Hawkeye football team is in California on this Christmas day preparing for the Rose Bowl. Coach Kirk Ferentz said before the team left that it would be a working holiday.

“It’s actually like a Wednesday at practice for us — Ho, Ho, Ho,” Ferentz said. With one week to go before the bowl game, he says they have to keep the preparation underway. He says they will celebrate Christmas as a team this evening.

“We do things a little differently I guess, but I explained to our guys,” Ferentz says, “first of all as a coach it’s bad luck to not be coaching on Christmas or over the holidays. We tried that a few years ago, it’s not much fun. We kind of get a routine down that we think works, and sometimes Christmas interferes with that.”

Ferentz says they’ll have a celebration after the day’s work is done. “We’ll do the Christmas too, but we are going to keep pushing toward the game and keep our timeline alive,” according to Ferentz. “If the guys are fortunate enough to play in the NFL they’ll go through the same thing….but we have a plan that we’ve stuck to and I think the guys understand that. The nice thing is we’re all going to be together here, that’s our family this time around. That’s kind of how we’ve done it traditionally.”

The players will get a chance to visit Disneyland Saturday and have an official welcoming ceremony from the Rose Bowl. They face Stanford in the game on January 1st.