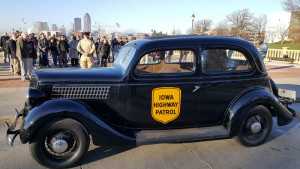 Many Iowans will be learning more in the new year about the history of the Iowa State Patrol. A restored 1935 Ford Tudor was unveiled earlier this month that’ll be used to showcase the agency’s 80-years of service.

Iowa Secretary of State Paul Pate says the vehicle was the first patrol car used by the 53 men who were hired as part of the original Iowa Highway Patrol. “We decided not to restore it totally to mint condition because, let’s face it, these cars worked in their day. There was no central air and there was no heating system. The radios were only one-way radios. So, the patrol officer could get a message, but they could not respond back and tell them where they were in the field,” Pate said. “If they came upon a car accident, they had to go to a nearby farm house and call it in on the telephone.”

Former Iowa Secretary of State Ola Babcock Miller is credited with the formation of the Iowa Highway Patrol in 1935. Volunteers helped restore the 1935 Ford Tudor which had been donated to the state and spent several decades in the basement of the State Historical Building.

Pate imagines a lot of Iowans will see the vehicle in parades and car shows around the state. “They’ll see it at the Iowa State Fair, the State Historical Museum, and any place we can find to exhibit it,” Pate said. “I think the Historic Museum staff will be very creative and energetic in finding places to showcase it because it’s a great thing to show off.”