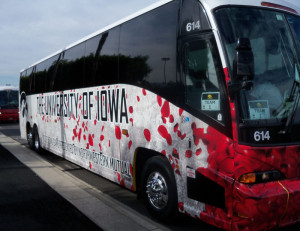 Temperatures have been in the 60’s and it has been mostly sunny, although some clouds moved in Monday.

They are practicing at the StubHub Center, which is a sports complex located on the campus of California State University, Dominguez Hills in Carson, California.

The practice fields are about 10 miles south of downtown Los Angeles, and the Hawkeyes travel there in large motor coaches appropriately covered in Hawkeye and Rose Bowl logos. They are helped through traffic by the California Highway Patrol.

A football kicked into a palm tree. (see arrow)

The first 15 minutes of the practices have been open to the media the last two days. No interviews are allowed during what is mostly stretching and drills.

The kickers did encounter something they don’t see in Iowa while practicing field goals. One of their footballs got stuck in a palm tree.

The Iowa teams did some of their drills Monday to music piped in.  Watch and listen in the video below.

Radio Iowa’s Dar Danielson in California following the Hawkeyes in their preparation for the Rose Bowl.