You are here: Home / Sports / Iowa’s base defense gets respect from Stanford 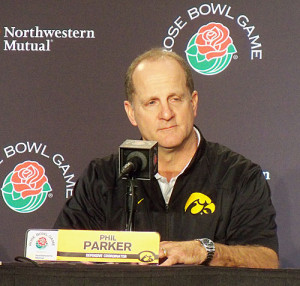 The success of the Iowa Hawkeyes in the Rose Bowl could come down to how well the defense stops one of the country’s top running backs.

He says they have to go 13 games back and then see all the things McCaffery can do to hurt you. “The preparation is definitely difficult for us, and you’ve always got to go back and keep on looking for plays they have designed for him,” Parker says. 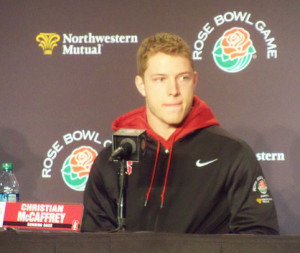 McCaffery says there’s not a lot of reading of the defense to do before the snap. He says they run they schemes very well with their techniques and blitzes and coverages.

“It’s gonna be tough, because there are not a lot of indicators of what they are doing. They line up and it’s the same stagnant front,” according to McCaffery.

Stanford offensive coordinator Mike Bloomgren says the Hawkeyes vanilla style actually makes it tougher to be prepared. Bloomgren says Iowa lines up the defense and the coaches trust that everyone will be in the right place, as opposed to the Pac 10, where they see a lot of different schemes and movement. Bloomgren says Iowa and Stanford are a lot alike in philosophy.

“Every time we touch the ball, we want to score points. That’s our offensive philosophy in a nutshell, hey let’s do whatever we can to score points.” Bloomgren says. “And the other thing is, play great defense. Both teams have certainly done that.” He says when it comes to Iowa’s defense, they can’t overthink the game plan. “The biggest thing for us as coaches is not to put in every play that draws up well against that structure on the board,” Bloomgren says. “You’ve still got to limit. You’ve got to figure out what you do best and what is going to fit best for your matchups.”

“I think a lot about Norm. Obviously this year there were a couple of games where I thought he was looking over and smiling a little bit,” Parker says. “Last time I was here, I was here with Norm in the Rose Bowl, I was a G-A for him in 1988. So, to me it brings a lot of memories.” Iowa meets Stanford in the Rose Bowl on Friday.