You are here: Home / News / Massive winter storm rolls in, up to 12″ of snow possible 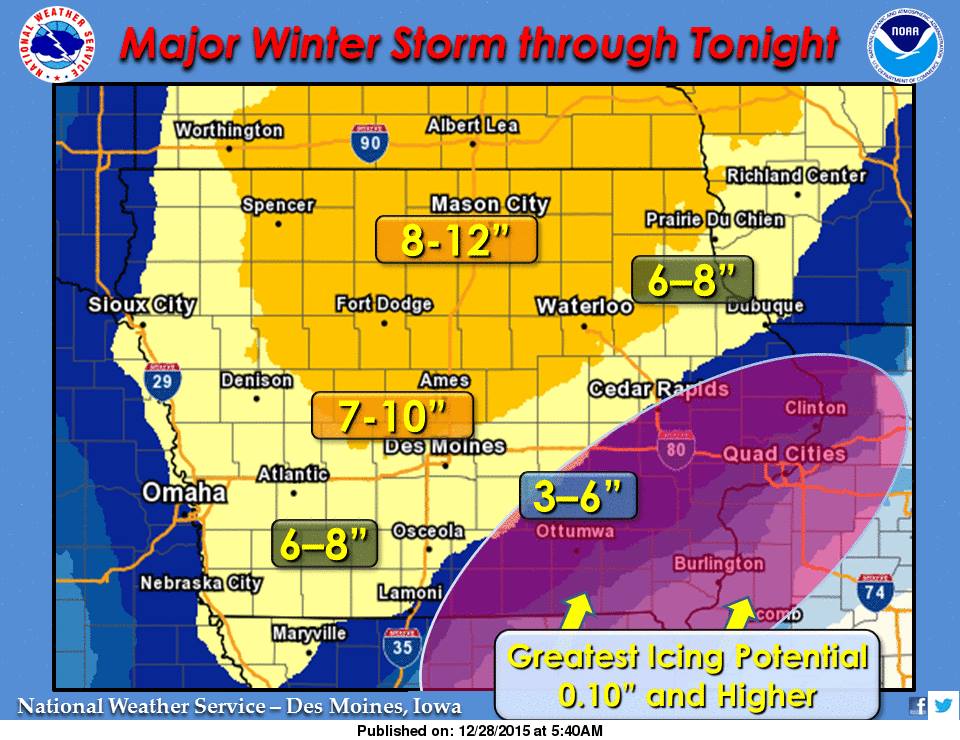 The entire state is under a Winter Storm Warning through tonight and heavy snow is already flying in some areas.

National Weather Service meteorologist Mindy Beerends says many Iowans may have to change their travel plans, as poor visibility and slick roads are becoming concerns, with up to a foot of snow in the forecast along with sleet, freezing rain and ice.

“The heaviest snow still looks to fall across the northern third, north-central portion of the state into northeastern portions of Iowa where around eight to 12 inches of snow may fall,” Beerends says. “Central portions of Iowa may be around six to eight, four to seven inches potentially here in the Des Moines metro. Lighter amounts of snow across the far southeast, maybe three to six inches of snow, with sleet and greater than a quarter-inch of ice possible with some freezing rain mixing in.”

If that layer of ice coats the roads, the going will be very slow for motorists across a wide section of the state.

Beerends says, “Blowing snow will also cause issues across much of the area, we may see visibilities reduced to a quarter mile or less in the snow and blowing snow.”

“This is a very large system,” Beerends says. “It’s impacting anywhere from central Oklahoma up into the Upper Peninsula of Michigan, down into Ohio and Indiana, Illinois, Wisconsin. Several different states are under Winter Storm Warnings and bordering that, some Winter Weather Advisories for lighter snow amounts. It’s also causing severe weather in the deep South, down in the Mississippi and Alabama areas right now.”

Beerends says if you’re making a long road trip or just going to the store for supplies, Iowans will need to be very cautious about the changing and potentially-dangerous weather conditions.

“Keep vigilant on the forecast and make different travel preparations if needed,” she says. “Pay attention to visibilities and snow-covered roadways.”