You are here: Home / Fires/Accidents/Disasters / Injuries for two people who jumped from burning building said to be minor 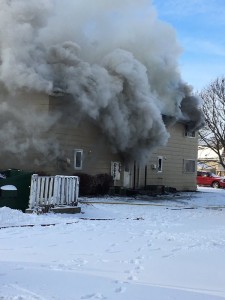 “As he pulled up to the scene, he saw one female jump from a window. He got out of his car and ran over to the building. At that time, there was a lot of smoke and flames coming from the building,” Wieck said. “He assisted the second female victim out of the window and down to the ground.” The two women sustained minor injuries.

A total of 15 residents were displaced by the fire. The Evangelical Covenant Church across the street from the complex is being used as a shelter for the residents and the American Red Cross is also assisting. The cause of the fire remains under investigation.