You are here: Home / Sports / Iowa’s top defenders talk about Stanford, being mean 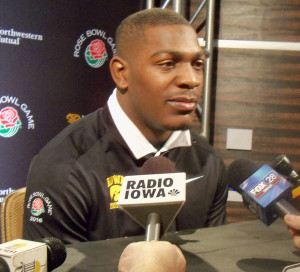 Iowa’s defense took center stage during a session with the media in California Monday as the countdown to the Rose Bowl continues.

Stanford has the Heisman Trophy runner up Christian McCaffery in the backfield, but Hawkeye All-American defensive back Desmond King says they are not a one dimensional offense, with a lot of weapons, including a top tight end, and a great offensive line.

Sixth-ranked Iowa is the underdog going into the game against 5th rated Stanford, and King says that’s okay because they’ve done well in that role all season long.

“That’s fine with us — we want to be the underdogs— we’ve been that way all season…all year. We just know that we have a big plate to fill up and we’re going to take that,” King says.

He says Stanford’s offense likes to grind it out just like Iowa’s offense and that may give them an idea of what they’ll face, but at the same time King says you never know what type of team they can be. 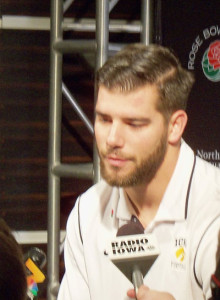 Linebacker Cole Fisher says that grind it out style makes it tough. “They’ve shown in the past that it’s hard to get their offense off the field. If they’ve got like a second and four to go then seems like what they want to do make is make it a third and one or third and two,” Fisher says. “….it’s really hard stopping them at the line with the techniques that they use.”

He credits McCaffery for making the offense work so well. Fisher says McCaffery is good because he has the patience to wait and see where the holes will open up when he runs.

McCaffery named linebacker Josey Jewell when asked who he saw as a standout on defense. Jewell says he is just part of the overall unit.

“Our teammates put us in those positions for other people to call us out. So, the defensive line is a big critical part of linebacker play, and the safeties filling in– so it’s the whole team aspect, it’s not just one player doing really well, it’s the whole team doing really well,” according to Jewell. He says if everyone on the defense does its job, then they make things happen.

“It’s all about the small details with us, following the ball the right way, setting edges, we just have to do the small things right to give us a chance,” Jewell says. 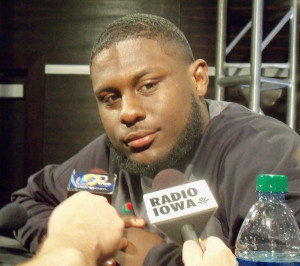 Iowa’s players have stayed pretty close to the party line in not wanting to give any bulletin board material to Stanford.

While he didn’t say anything to upset the Cardinal, defensive lineman Jaleel Johnson did stray a little from the standard answer and says defense is about playing mean on defense. He says that’s part of his history.

“My family is full of mean people, so you know it was just handed down. My grandfather, he was a really mean person, my father was a mean person, so that’s where it came from,” Johnson says. Even though they are mean, that doesn’t make them bad people. “They’re great people, they’ve very, very great people,” Johnson says. “I take pride in being mean just like them.” Johnson says he doesn’t need anything to turn on his mean side in a game.

“It just happens that way, you make a play, make a very great play, and it all comes from being mean. You can’t be soft out there,” Johnson says.