You are here: Home / News / Storm summary: many Iowa cities with 9+ inches of snow 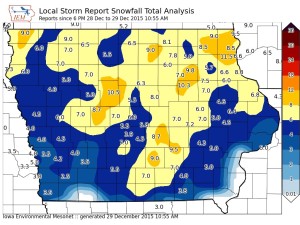 Many areas of the state are buried under a half-foot or more of snow following Monday’s winter storm.

National Weather Service meteorologist Ken Harding says some of the heaviest snowfall totals include 10.5 inches near Fort Dodge, 10.3 inches in Waterloo and 9 inches in both Rock Rapids, in far northwest Iowa, and Knoxville in south-central Iowa. “And we had 11.5 inches just northeast of Decorah,” Harding said.

All 99 counties in the state received snow, but some locations in far southern Iowa — near the Missouri border — were blasted with mostly freezing rain and sleet. Harding said that coating of ice damaged trees and power lines and made things dangerous for motorists.

“Sometimes that actually makes driving more difficult with the icing on the road. It’s harder to see. It just appears to be a little mist and that can make things pretty slippery,” Harding said. “Then, you put some snow on top of it…you know, three inches of snow on a quarter-inch of ice is harder to drive in than eight inches of snow.”

The deep snow cover across Iowa won’t be melting anytime soon. Temperatures are expected to remain mostly below freezing through the weekend.

Some of the coldest temperatures of the season, so far, will arrive on New Year’s Eve. “In fact, in Des Moines, we could get into the single digits Thursday night and some of the outlying areas in the deeper snow could see temperatures at zero or maybe below zero,” Harding said.

There is a chance for another round of snow across Iowa tonight into tomorrow, but not much — maybe an inch or less, according to Harding.