You are here: Home / News / Donate your old Christmas tree to be nibbled by a herd of goats 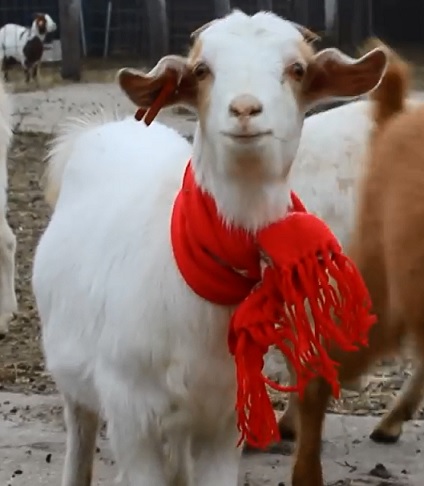 Central Iowans who have Christmas trees to get rid of can dispose of them in an unusual way and at the same time help out a charity.

Aaron Steele is the spokesman for Goats on the Go, which has a farm near Ames. Steele says the trees should be stripped of all ornaments and tinsel as they’ll become goat feed.

“Goats really need and like variety in their diets and when we put a Christmas tree in there, they will attack it,” Steele says. “They’ll eat the needles and eat the bark and take it pretty much down to just the bare trunk.”

It may sound odd, but those evergreens, spruces and Douglas firs make a great meal for the animals.

“Goats like to eat brushy sorts of things,” Steele says. “In the summer, our goats are used to clear unwanted vegetation on customers’ property that often includes weeds and brush. Christmas trees are a lot like that sort of stuff, there’s just not a lot of that to be had in the winter.”

He says the project, called “Goats on the Snow,” will help Iowans find a safe, environmental way to get rid of their Christmas trees while also being of benefit to a special cause.

“Disposing of their tree is free but we encourage people to donate to a charity called His Hands For Haiti, in particular, their program called A Kid For A Kid,” Steele says. “That program purchases goats for children in Haiti to help provide some meaningful income for their families and also to teach those kids responsibility.”

Old Christmas trees can be brought to the Story County farm this Saturday from 10 AM until 4 PM at Steenhoek Environmental, west of Ames.