You are here: Home / News / Christie urges Iowans not to pick ‘amateur’ as GOP nominee 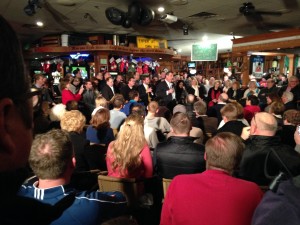 “You all say this to me, at least you have in the beginning: ‘You’re in my top three,'” Christie said and the crowd laughed. “…I appreciate your kindness and your courtesy, but I am here to become number one now…I am here to win your support and win your confidence and win your vote on February 1.”

About 250 people crowded into an Irish-themed bar and a chilly overflow room next door to hear Christie. The New Jersey governor took more than a dozen questions from the crowd and urged them to choose him, rather than an “amateur” to face Hillary Clinton in the debates before next fall’s General Election.

Christie touted his tax plan and his entitlement reform ideas. He fielded a question about “ObamaCare” and Christie repeated his call to repeal the law and have officials in each state come up with their own designs for health care reform for their citizens.