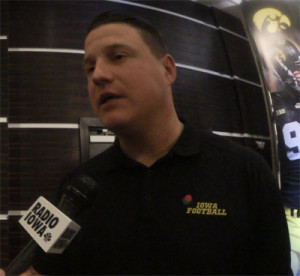 The Iowa Hawkeyes are heading into final days of preparation before taking the field for the Rose Bowl.

The players had their final media session with reporters yesterday and assistant coach Brian Ferentz says the scheduled called for their final practice as they don’t have one scheduled today. They will go over the final game plan on Thursday.

Ferentz is the son of head coach Kirk Ferentz, and like the players is too young to remember the last time Iowa played in this game. “I was here, I wasn’t at the game, I was here in L.A. I was two, so I wasn’t old enough to know what was going on,” Ferentz says.

One thing Ferentz does know is there will be some big plays in a big game that could decide the outcome. “There’s going to be ups and downs in the game — there’s going to be momentum swings, we are going to have to deal with that. They key for us is to continue to play just like we’ve done all year. Just like if you look at our season, if you look at it as a 13-game schedule, there’s ups and downs within those 13 games. How you handle those — that’s what defines you as a football team,” Ferentz says.

Iowa’s situation is a lot different than it was last year when they limped into the Taxslayer bowl at 6-6. Ferentz was asked if he thought the turnaround would get this far.

“The goal is to win the Big Ten Championship, so the number one goal in our thought was ‘let’s go win the conference.’ Unfortunately we fell short, that’s a little bit disappointing,” Ferentz says. “I think when we get a little bit further down the road here, maybe we’ll be able to reflect on the rest of the year as a whole. And certainly a lot of good things happened, I don’t want to diminish that, but our focus right now is on beating Stanford on January first.”

Stanford head coach Brian Shaw has also been pleased with his team’s work leading up to the game. He says they’ve stressed the importance of taking advantage of the opportunity in this game. He was asked about the things that will make that difficult against Iowa, and says there are many, as Iowa’s offense is very efficient and don’t give the ball away.

Shaw says Iowa may run a standard defense, but he says they have some wrinkles. “Defensively, you can’t say that they don’t blitz because their blitz numbers are a high percentage, but when they come after you they come after you,” Shaw says. He says when you get to third down, everybody is a viable blitzer on Iowa’s team.

Hawkeye defensive back Jordan Lomax says it’s likely going to be the running, not passing that makes a difference for Stanford. He says Stanford is very stout with their running game with a good offensive line and the runner up for the Heisman in the backfield.  “It’s going to be very tough to stop their run, and that’s going to be the difference in the game.”  Lomax says they’ll need everyone playing well to keep Stanford from gaining yards on the ground.

“It’s going to start up front with our D line — they are going to have to penetrate the offensive line — and then it’s going to come secondary and the linebackers filling the right allies of support to make the tackle. So, it’s going to take all 11 guys to stop the run,” according to Lomax.

One Hawkeye who is really ready to get on the field is senior running back Jordan Canzeri. He injured his leg again in the Big 10 Title game, but says the weeks leading up to this game have helped him and others recover. He says it’s finally good to see everyone healthy, “so we’re really excited.”