You are here: Home / Sports / Iowa native hopes to pave the way for #2 Alabama in Cotton Bowl 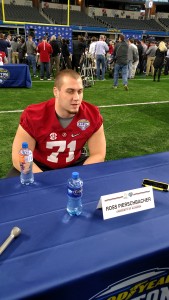 Iowa was not able to defeat Michigan State in the Big Ten Championship Game but one native Iowan hopes to be on the winning side against the Spartans in Thursday’s Cotton Bowl.

Ross Piersbacher is the starting left guard for Alabama. The sophomore from Cedar Falls originally committed to play at Iowa but changed his mind and signed with the Crimson Tide. He knows what to expect from the Spartans.

“Growing up I watched the Big Ten so I know their style of play and it makes it fun knowing that is what we will be going up against”, said Piersbacher. “It is going to be a big and physical game and it is going to be fun.”

Tim Fisher contributed to this story