An Iowa woman will ride on a float in the Rose Parade Friday to honor her dad and connect with old family traditions.

Julie Durr of Solon will ride the Donate Life Rose Parade float in honor of her late father Russ Gerdin, who received a liver transplant that extended his life for five years. Durr says she was excited when she was asked by the Iowa Donor Network to represent them on the float. She got to do some work on the float today.

Working on the float.

“It was really awesome, because I have always been a Rose Bowl skeptic, I’ve always watched and I’ve always thought to myself ‘how do they make that out of all organic material’ or how do they do that?,” Durr explains.

Durr was selected to be on the float long before anyone knew Iowa was going to play in the Rose Bowl game. She says it’s a kind of an amazing thing that she’ll get to see the Hawkeyes given her past history with the team.

“My parents were huge Hawkeye fans and I remember falling asleep at many a game at Kinnick Stadium when I was a young child on their laps. For years my parents went to every bowl game…and I don’t know if they just wanted to be with friends, but they just never took us kids along,” Durr says. 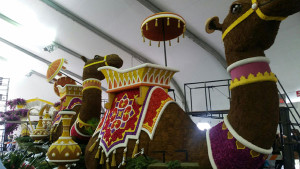 Durr got busy as she grew older and didn’t go to bowl games. Then about 10 years ago she wanted to revive the tradition of her parents, but decided she wouldn’t go until the Hawkeyes were in the Rose Bowl.

She says the Big Ten Championship game was bittersweet for her because she was rooting for Iowa to win it, but knew if they did win then she wouldn’t get to see them in the Rose Bowl. “I like to tell everyone they have me to thank that they are here, because all the stars aligned and the whole serendipity occurred,” Durr says, “that’s why the Hawkeyes are here, because I held out for 10 years, waiting and waiting and wouldn’t go to any bowl games until we got here.”

Durr’s father created Heartland Express trucking in North Liberty, and she says her family remains passionate about organ donation after seeing what it meant to him.

“It’s a gift beyond words, and beyond expression. He got to see six more grandchildren born, he got to spend his 40th anniversary with my mom, he got to build his corporate office at Heartland — which was of course his biggest baby of all,” Durr says. “All those things wouldn’t have been possible without organ donation and without someone giving him the ultimate gift.”

Durr encourages everyone to consider signing up to be an organ donor. “If you are not going to just sign up and do it, at least make an informed decision,” Durr says. “At least check it out and know what it is all about, and hopefully choose to do it. But if you don’t that’s understandable, at least you made an informed choice.” Russ Gerdin died in 2011. Durr will hold a picture of him as she rides on the Donate Life float.

She is one of three Iowans who are featured on the Donate Life float. To find out more about organ donation, go to www.iowadonornetwork.org.