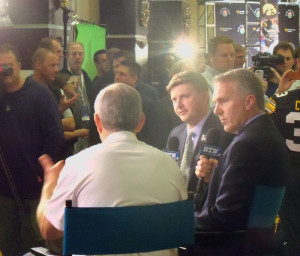 Former Iowa quarterback Chuck Long is seeing the Rose Bowl in a much different role as the Hawkeyes prepare to take on Stanford. Long is working as an analyst for the Big Ten Network.

“I really have enjoyed being in the media now and you see a lot more perspective…when you are a player and a coach you’re focused on your position. When you are part of the media you see all aspects and you find those little stories, those unique stories,” Long says.

Long went into coaching for a time after his playing career, and says some of his work in the media is similar to being a football coach. “I love the prep, really media prep or TV prep is not much different than coaching prep. You still need to put a lot of time into it and be prepare and the more time you put into it, the smoother it goes,” according to Long.

Long was the starter for the Hawkeyes in the 1986 Rose Bowl and says the excitement now is much the same as it was then, calling the fan interest after the Hawkeyes learned they were going to the Rose Bowl “incredible.” 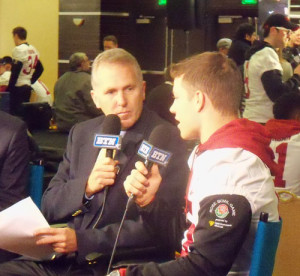 He says the Rose Bowl has been able to remain a top bowl even with all the changes in the playoff system.  He says that’s partly because of the setting.

“It’s a special game, just the little moments of this game, the week, all the functions, and then the actual bus ride to the stadium,” Long says. “And when you see the stadium for the first time — it hits you –you know, the majestic scenery and the way it is in the valley there. You see the Rose Bowl on the stadium –it’s quite a scene.”

In addition to his work with the Big Ten Network, Long is now the CEO of the Iowa Sports Foundation, the organization that runs the Iowa Games, the Senior Games and the Live Healthy Iowa challenge.