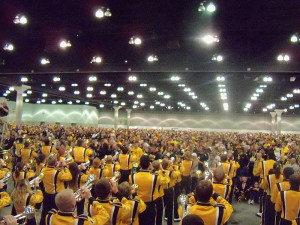 The Hawkeye Marching Band plays at the Hawkeye Huddle.

The black and gold clad Hawkeye fans watched the cheer squad and listened to the marching band as they get ready for Friday’s Rose Bowl game.

While the convention center was filled, many other Hawkeye fans were milling about outside around the Staples Center where the L.A. Lakers play. Joe, Don and John Dunwald from Cedar Rapids, Waverly and Robbins Iowa were getting their picture taken outside. 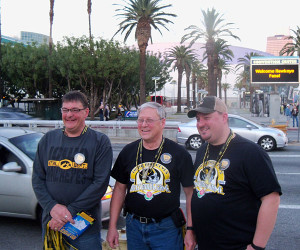 They weren’t surprised by the number of Iowans who’ve showed up. “Not even a little,” Don said and the others laughed.

For the Iowa fans who are in Los Angeles, the first topic of conversation is how they got out of Iowa. John says they had no problems. “No it was a great trip,” he says. Don and John are brothers and Joe is John’s son.

Bruce McDonald and his wife had problems with the weather in Chicago. “We arrived a little late in Dallas and by the time we’d got there, we missed out flight. Luckily we were able to get another flight out of Dallas,” McDonald says. Doug 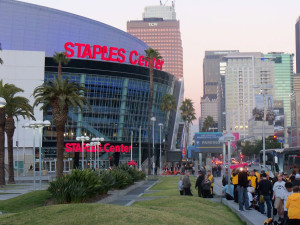 Freeman of Clive sat next to McDonald and says their charter from Cedar Rapids didn’t have the same issues, even though it was snowing. “No our experience was perfect,” Freeman says.

Freeman is like a lot of people who waited a long time to follow the Hawkeyes to Pasadena. “In ’81 my wife and I said we can’t afford to go. In ’85 our daughter wasn’t even a year old, so we couldn’t come. And then in ’90 I bought a business and said we’d probably not go —   we’d go the next time thinking it might be five years,” Freeman explains.  “Twenty-five years later we’re here. In 25 years I hope to be 95 years old, and I’m not sure I’ll make it then.” 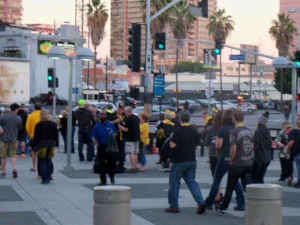 The streets of Los Angeles were filled with Hawkeye fans Wednesday.

McDonald says they started thinking about making a bowl trip early this year — sometime around mid-season — they thought they would go to wherever Iowa went for a bowl game. It didn’t take them long to finalize their decision to come California for the Rose Bowl. “We were hoping it would be one of the playoff games — but when we heard it was the Rose Bowl that was it,” McDonald says.

Thousands of Hawkeyes are expected to gather again today with another big pep rally planned at the USS Iowa in Long Beach.