You are here: Home / Human Interest / Two Iowans plan to complete marathons in 99 counties in 2016 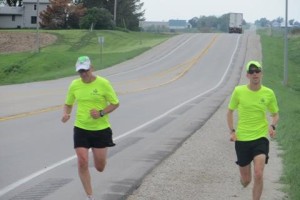 Dennis Lee (left) and Daren Schumaker near the end of a 26.2 mile run across Adams County

Two men from eastern Iowa plan to complete a remarkable feat in the New Year. Dennis Lee of Walford and Daren Schumaker of Cedar Rapids are running marathons in all 99 Iowa counties.

They spoke with KCRG-TV during their recent 26.2 mile long run through Cerro Gordo County. “The best run…my favorite was Chickasaw County, maybe partly because I’m from there,” Lee said. Schumaker added, “The worst run was in Taylor County. It was raining that day and it was probably 38 degrees.”

Their journey began in 2009. They have about a dozen more counties left and Lee said they’ve scheduled Delaware County for their final marathon in mid-September. “It’s almost a bitter-sweet thing because we’ve done so many and had a lot of fun, but we’re looking forward to the end,” Lee told KCRG.

The two men conceived the idea many years ago as a way to raise money for the American Heart Association.