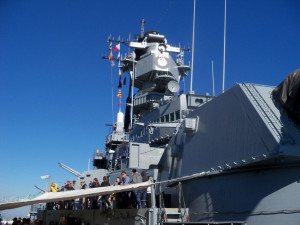 Thousands of Iowans traveled to Long Beach, California Thursday for a pep rally on board the USS Iowa.

Many kids toured the ship with their parents, including 10-year old Zander Schuett

“It’s very cool to see all the cannons and everything,” Zander says. Brother Nile Shuett says it’s a piece of history. He says it’s amazing that the ship is in the same shape that it was in when it was used in World War Two. Their father Clay Schuett had much the same reaction. 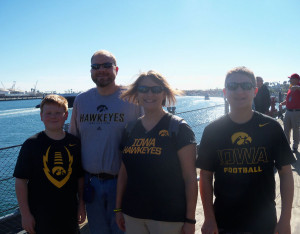 The Schuett family aboard the USS Iowa.

“I think it is fantastic to see the size of the 16 inch guns, it’s just amazing, just very impressive, very cool. Great to see the crowd out here too, see all the Hawkeye fans,” Clay Schuett says.

Jim from the Quad Cities was walking along the deck with some friends. “Oh it’s really neat, it was worth the trip alone,” he says.

Cory Kusick of North Liberty brought her kids to California for the game, and said they had to see the battleship too. “It’s amazing, it’s massive, amazing, the whole thing has been a really neat experience,” Kusick says. 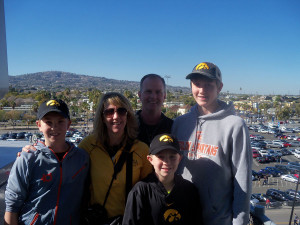 Her son Ben Kusick was also impressed. He says he can’t imagine being on the ship for the amount of time sailors were aboard. Zack Kusick says the size of the ship stood out and how big the guns are.

Battleship Larry is a tour guide aboard the USS Iowa. He got his name from his service on another battleship. “I served on the Missouri, so that kind of drew me to the ship,” he says. People who tour the ship can learn all about its history as he says you can see the 16 inch guns, and see where the three presidents who were carried on the ship stayed, as well as a list of all the crewmembers who served on board the ship through 1990. 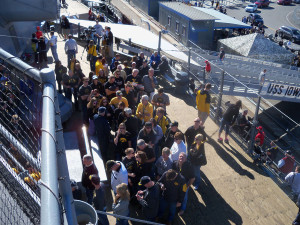 Iowans lined the decks of the USS Iowa.

He says the Iowa was a first of its kind. “This is the prototype of the Iowa class, this is the Iowa class that started the other ships, the Iowa, New Jersey, Missouri, Wisconsin,” according to Larry. The Iowans enjoyed food and music along with the tours of the ship, and got to witness the firing of one of the smaler guns on the ship.

The State of Iowa help save its namesake battleship from the scrap heap and the USS Iowa is open free to Iowa residents throughout the year.