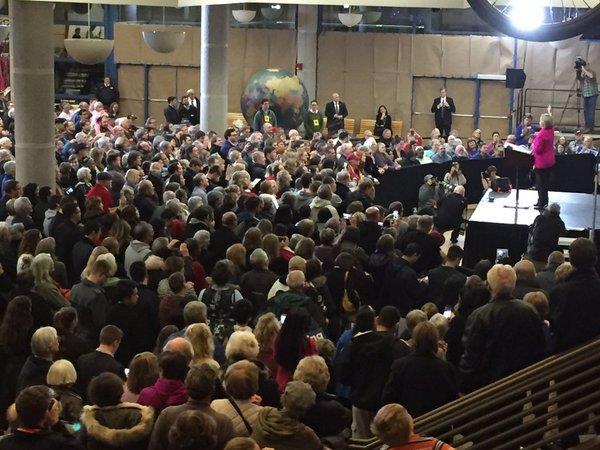 “That is a very solemn responsibility that the people of Iowa hold in your hands.”

Earlier in the day, Clinton spoke to about 500 people in Cedar Rapids for about half an hour before taking questions from the crowd.

“I’m interested in your response to ‘The Donald’s’ comment that you and President Obama created ISIS,” a man in the crowd said.

Clinton responded: “I’ve adopted a New Year’s Resolution. I’m going to let him live in his alternative reality and I’m not going to respond.” The crowd cheered.

On Sunday, Clinton told Radio Iowa the statement about ISIS was “clearly untrue” and part of a pattern of “exaggerated and often inflammatory remarks” from many of the Republican presidential candidates, not just Trump. Tonight, Clinton began her remarks by ridiculing the rhetoric coming from the Republicans.

“I’ve been listening to our Republican friends who are running for the office,” Clinton said, as the crowd reacted with laughter and a few boos. “Yeah, it is a little daunting. They are quite evidence-adverse.”

Clinton didn’t directly mention Trump near the end of her speech, but she did allude to Trump’s trademarked “Make America Great Again” campaign slogan.

“I happen to think America already is great, but we can be greater,” Clinton said. “But we don’t get greater by dividing, by insulting, by engaging in hateful, mean-spirited rhetoric.” Some in the crowd punctuated the phrases in Clinton’s sentence with affirmations like, “That’s right,” before the entire audience cheered at its conclusion.

Clinton warned the crowd the Republicans in congress would be able to repeal the Affordable Care Act if a Republican wins the White House in 2016.

“They are voting against to repeal it and to defund Planned Parenthood again in Washington this week,” Clinton said. The crowd booed, prompting Clinton to interject: “Exactly!” before laughing along with the crowd. “Now President Obama will veto it if they pass it, but if there’s a Republican sitting in the Oval Office, it’ll get signed.”

Clinton praised President Obama’s decision to issue an executive order to require small-scale gun sellers to conduct background checks before selling a weapon, but she also ran through a litany of other gun-related measures she’d like to see made law. Later, Clinton drew the loudest burst of extended applause with this declaration: “I will stand up to the gun lobby and we will fight to get common sense gun safety measures.”

Clinton said it’s time to close the loophole that allowed a man with an arrest record to buy the gun he used for last summer’s massacre at a South Carolina church. A clerical error delayed the background check, but federal law allows the sale to go through if the check is not completed within three business days.

Clinton will campaign Tuesday in Osage, Sioux City and Council Bluffs. Her husband, former President Bill Clinton, is scheduled to campaign for his wife in Iowa on Thursday.