You are here: Home / News / Cruz says the ‘time for bickering’ among the GOP candidates is over 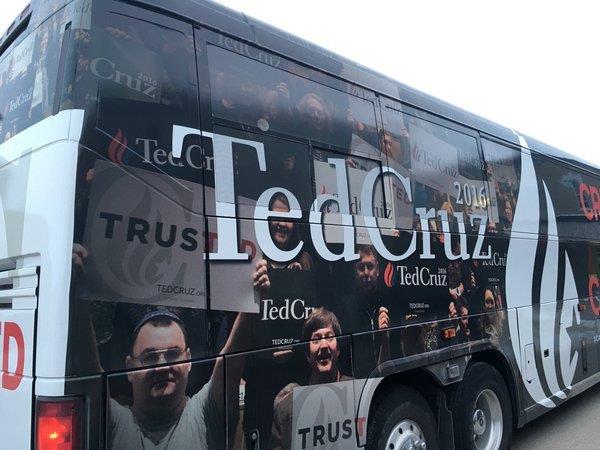 Republican Ted Cruz is promising that if he’s elected president, he will rescind all of President Obama’s executive orders, including the ones Obama is now considering that would tighten federal gun laws.

“Yet another executive order, trying to go after our right to keep and bear arms,” Cruz said, eliciting boos from his Iowa audience this morning. “Well, he can abuse his power all he wants. He has a phone and he has a pen, but if you live by the pen, you die by the pen and my pen has got an eraser.”

Cruz kicked off his week-long bus tour of Iowa this morning with a quick speech at King’s Christian Bookstore in Boone. The bell to indicate the front door to the store was opening and closing kept ringing as Cruz spoke.

“I’ve got to say, the tone is kind of fun. It’s like being on a game show. You get a buzz for right. ‘Second Amendment.’ Ding. I’m sort of waiting for ‘Family Feud’ — you know, ‘Abuse your power,'” Cruz joked as he make a sound akin to the buzzer that denotes an incorrect answer on the show. “That’s pretty good.”

About 100 people greeted Cruz on the first stop of his six-day campaign swing through the state.  Cruz told the crowd he is a consistent conservative who will repeal “ObamaCare” and protect religious liberty.

“I am thrilled to be back in Iowa…I’m thrilled to be here at this Christian bookstore. You know I was sitting here…I was looking up and seeing Joshua 24:15 on the wall. ‘Choose you this day whom you will serve. As for me and my house, we will serve the Lord,'” Cruz said, getting an “Amen” from some in the crowd. “And what a powerful reminder of values that Washington, D.C. seems to have forgotten.”

Cruz criticized President Obama, Hillary Clinton and the Republican establishment, while he called his rivals for the GOP nomination “very, very fine” people.

Cruz spoke with reporters early this morning. He addressed the armed stand-off with protesters of federal restrictions on the use of public lands in the western U.S. The group has occupied a national wildlife refuge in Oregon.

“All of us are concerned and our prayers are with the men and women of law enforcement and that this incident resolves peacefully,” Cruz said. “Everyone of us has a First Amendment right to speak out, to protest, to express our views, but no American has the right to use violence or threats of violence and it is my hope and prayers that these protesters resolve the situation peacefully.”

Cruz is making stops in Carroll and Grundy Center this afternoon. He’ll be in Winterset early this evening and Cruz plans to be at Penny’s Diner in Missouri Valley at 10:45 tonight.