You are here: Home / Fires/Accidents/Disasters / Fatal accident a reminder of danger on Iowa lakes in winter 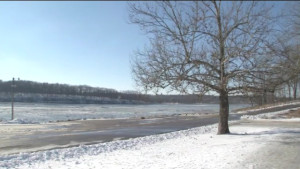 The death of an eastern Iowa teenager is serving as a reminder about the dangerous conditions on lakes in the winter. Seventeen-year-old Tanner Wymer of rural Iowa City was in a canoe that capsized on Coralville Lake Sunday afternoon.

His body was recovered Monday. Another occupant, 51-year-old Michael Felton of Solon, was able to swim to shore. Dave Wilson, with Johnson County Emergency Management, told KCRG-TV that the lake isn’t completely frozen, but contains chunks of ice one to two inches thick.

The lake level is also 15-feet higher than normal for early January. “This has been a pretty unusual winter here in the Midwest,” Wilson said. “We’ve had flooding issues, warmer than normal temperatures, lake levels have been up and down, and flows that have been high and then low again.”

Officials believe Wymer and Felton were on the lake to take pictures of a home. They were not wearing life jackets and a combination of wind and waves likely caused the canoe to capsize.

“It’s not a good time to be in the water for any reason,” Wilson told KCRG. “The flows are coming through at irregular rates and the ice is not stable. If you have to be on the water for some reason, absolutely have a life jacket on you.” Wymer was a senior at Solon High School. Family and friends gathered at the school Monday night for a candlelight vigil.