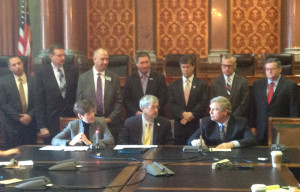 “School superintendents are standing with farmers and farm groups with that common Iowa refrain and that is: ‘Let’s work together,'” Reynolds said.

The plan would extend the one-cent sales tax for schools that is set to expire in 2029 for another 20 years and dedicate most of the inflationary growth expected to agland conservation projects. Sioux City Schools superintendent Paul Gausman said since the tax is scheduled to end in 13 years, his school is no longer able to use that expected tax revenue as collateral for bonds which are generally repaid over a 20 year period.

Under the governor’s plan, schools would get just as much from the one-cent sales tax in future years as they’re getting this year, plus another $10 million annually. The rest of the inflationary growth in sales tax collections would be diverted to water quality projects. Iowa Soybean Association executive director Kirk Leeds is also school board president for the Boone Community School District.

“Education gains additional dollars, additional ability to make long-term infrastructure investments and farmers will continue to partner with the USDA and the state to make investments to improve water quality,” Leeds said.

Two representatives of the Iowa Corn Growers Association were on hand to show their support for the proposal. The announcement was made during an annual legislative seminar hosted by the Associated Press and legislative leaders from both parties expressed reservations about the idea. Senate Democratic Leader Mike Gronstal said it was like robbing Peter to pay Paul and “undercuts” schools.

Former Iowa Governor Tom Vilsack, who is currently the U.S. Secretary of Agriculture, joined Branstad at the news event and expressed his support for the proposal.  Read more about the remarks from Vilsack and Branstad here.