You are here: Home / Education / Group mobilizing parents of kids with learning, attention issues in school 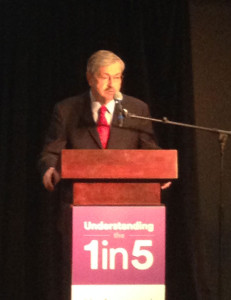 A conference today in Iowa is focusing attention on the one-in-five kids in schools who have learning and attention issues.

“We want to create a movement of these parents, because it’s one in five kids, which many people don’t realize,” says Kevin Hager, manager director of Understood. “And so when you know you’re not the only person in that school dealing with those issues. There are four other parents in that classroom and 100 in the school and a thousand in the district, there’s power there.”

The event in Des Moines is the first of many Hager and his staff have planned around the country.

“We want to just hear straight from parents, really create a dialogue about how we can be more helpful, what they need and how we can facilitate a stronger relationship between parents and the schools,” Hager says.

Understood.org launched in October of 2014 as a free online resource, to help parents try to figure out why their child may not be succeeding in school.

“You give the age and condition of your child, what they’re struggling with, and it will tell you: ‘Here’s what else is in that equation,'” Hager says. “‘Here’s what else you should keep an eye on. Here’s how to navigate that journey more successfully.'”

Fifteen non-profit groups are behind Understood.org. Every day there’s a “live” event on the site featuring a national expert on attention difficulties or learning issues, like Dyslexia. Today’s conference in Des Moines has attracted parents, educators and people like Toni Fuller Merfeld. She owns the Metro West Learning Center in Clive and works with children who have issues that keep them from succeeding in school.

“These children are just as smart as the other children in class,” Fuller Merfeld says. “They just learn differently because of the way their brains work.”

Governor Branstad welcomed the group to Des Moines and praised their efforts. Branstad says there can be “staggeringly negative” results if children with learning and attention issues don’t get the help they need to succeed in school. He cited statistics indicating this group of children are more likely to be suspended, expelled or drop out from high school.