You are here: Home / Sports / Tuttle adjusts to basketball life in Germany 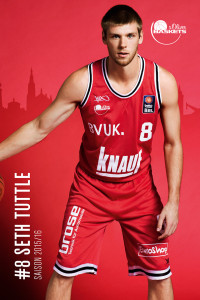 Former Northern Iowa All-American Seth Tuttle is adjusting to life on an off the court in Germany. Tuttle is in his first season playing professionally for a team in the city of Wurzburg and says he is not playing with his back to basket as much as his did in college.

Tuttle plays for a team called s. Oliver Baskets and he says it is a club with a passionate fan base.

“It is actually a lot of fun”, said Tuttle. “It is a smaller gym that only holds about 35 hundred but it is sold out and you can’t get a ticket to the place unless you get it months in advance and it is absolutely crazy”

The native of Sheffield is averaging just over 10 and a half points per game and in his last outing on January 2nd scored 21 points and grabbed seven rebounds in an 87-76 win over Mitteldeutscher BC.

Tuttle says while hew is enjoying his first season as a pro he still has a goal of someday making an NBA roster.

Joel McCall from KLMJ contributed to this story