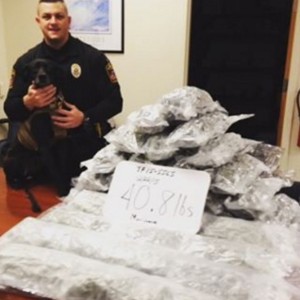 Police in a Des Moines suburb recently launched a K-9 unit and the dog made a big discovery on his first case.

The dog, named Bosco, joined the Ankeny Police force last fall and had been training ever since. This month, Bosco was out on his first job assignment and helped with the discovery of 40 pounds of marijuana.

The drugs have an estimated street value of $122,000, according to Ankeny Police, who refused to discuss details and only mentioned the case with a photo of Bosco and the pot in an Instagram post.

Bosco was a rescue dog from Indiana. Donations to the City of Ankeny helped police obtain the dog. That included a 5-year-old boy, Tristan Sommerfeld, who arranged his own fundraiser and collected $1,500 for the K-9 project.