You are here: Home / News / Donald Trump, Jr. in Iowa all week — to hunt deer 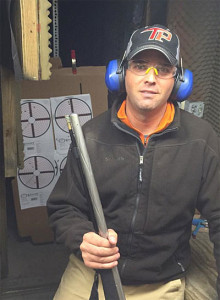 Republican presidential candidate Donald Trump will be in Ottumwa and Clear Lake tomorrow to try to harvest votes for the Iowa Caucuses, but his oldest son is already in the state — aiming to harvest deer.

“It’s great to be here. I was invited a couple of years ago on the governor’s hunt, long before my father ever got into the political spectrum and had a good time and met some good friends,” Trump said during an interview with Radio Iowa.

Trump is an executive in the Trump organization and has appeared in the boardroom on “The Apprentice” as his father evaluated contestants on the reality T.V. show. The younger Trump got here Tuesday and has been staying with friends in the Centerville area. (The Instagram photo was taken Wednesday as he did some target shooting at an underground range.) He is determined to bag one of the white-tail deer that are roaming around Iowa.

“For a guy like me from New York where we don’t have quite the quality that you guys have, I wanted to come out early and make sure we got a few good days in there,” he said. “If you don’t put in the time, you’re not going to do well.”

Trump’s maternal grandfather taught him to hunt. Trump not only hunts with guns, he is an archer as well.

“I like it all. For me, it’s about just getting out there, relaxing. I think the outdoors has been very good to me,” Trump said.

“…Being from my family and New York, in a city like that, I think the fact that I was in a tree stand or a duck blind on many mornings probably kept me out of a lot of other trouble I would have gotten into growing up and I love the lifestyle. I live that lifestyle and I try to introduce my children to it because I think it’s an important tradition, a very American tradition…If I could get more kids could be outdoors instead of playing video games, I’d be really happy.”

Trump and his wife have five children. Trump told Radio Iowa he’s “not really a politico” but he does have an opinion about President Obama’s executive orders on guns.

“I’m a competitive shooter. I shoot every weekend. I reload for numerous calibers and do all that stuff myself, so beyond just being an outdoorsman, I’m also a big-time shooter and Second Amendment supporter,” Trump said. “And when I see this legislation all I look at is more government red tape, the sort of ‘death by a thousand cuts’, trying to make it more difficult for people who actually are willing to obey that laws not being able to get guns, not doing much about preventing actual criminals from doing this.”

For the doubters who call Trump’s father a “carnival barker” or worse, Donald Trump, Jr., said his dad is “100 percent real” on the campaign trail.

Trump said he thinks one reason his dad didn’t run for president in 2012 is because he was worried his children “were too young” to take over Trump enterprises. The candidate said last spring that he was ready to hand his company over to Donald Trump, Jr.; his daughter, Ivanka; and son, Eric.

The first-born Trump — the sportsman in the family — tried to get the tags to hunt deer in Iowa last year, but wasn’t successful. He got the tags this year and has long planned to “put in a solid week” on the hunt here. Trump said he’s been sleeping “in a buddy’s basement” in southern Iowa, with plans to leave Monday morning after, hopefully, bagging a deer.