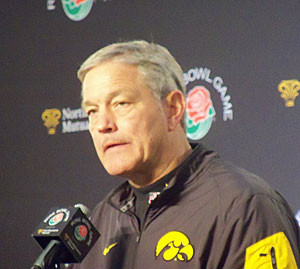 A year ago Iowa football coach Kirk Ferentz held a January news conference to address concerns about the direction of the program. Thursday Ferentz was asked about how the Hawkeyes will handle lofty expectations heading into next season.

A large number of starters return from a team that finished 12-2 and lost to Stanford in the Rose Bowl. Ferentz says it will be a new team with new challenges and there are no guarantees of sustained success.

“You know it is conceivable we could have a better football team and not win 12 games next year”, said Ferentz. “Just like Desmond King could play better next year and not win the Thorpe award. There are no givens on that either.”