You are here: Home / Business / More Iowans bought new cars and trucks in 2015 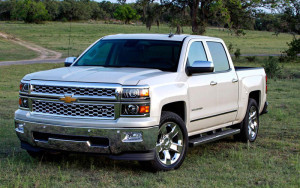 The Chevy Silverado pickup was the top selling new vehicle in Iowa in 2015.

That mirrors national trends as more automobiles were sold last year across the country than ever before.

Bruce Anderson, president of the Iowa Automobile Dealers Association, says possibly the biggest factor is an easing in credit.

“It’s easier today to get a car loan than it was even a year ago and significantly easier than back in ’07, ’08, and ’09 during the financial crunch,” Anderson said.

Incentives from manufacturers such as deep cuts in pricing and rebate programs are also a factor. Anderson cites pent-up consumer demand as well, noting the average vehicle on an Iowa roadway is 11 years old.

“So, the typical Iowan hasn’t bought a new car in 11 years and once they get in and see ’em, there’s been a lot of changes in 11 years,” Anderson said. “The new cars and trucks are cleaner — they’re more fuel efficient. They’re safer. They have all these driver assist features — lane change warnings and those kind of things that we weren’t seeing 11 years ago.”

New vehicle sales are considered a strong indicator of the health of the economy. There were 142,066 new vehicle registrations in Iowa last year. “Back in 2009, there weren’t even 100,000 (new vehicle sales). So, if you measure from 5 or 6 years ago, the bump up is significant,” Anderson said. “I think that’s an indication of Iowa’s stabilizing and growing economy. There are more people employed today than there was 5 or 6 years ago and of course, you can’t afford a new car if you don’t have a job and a paycheck.”

Owners of many dealerships across Iowa are reporting 2015 was their best year ever, according to Anderson. Of the new vehicles sold in Iowa last year, nearly 44,000 were cars and just over 98,000 were trucks and SUVs.

The top selling vehicle in Iowa in 2015 was the Chevy Silverado.