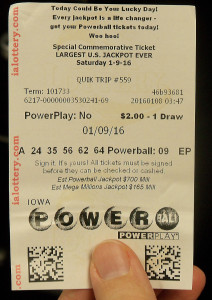 Thousands of Iowans are hoping to cash in on the record Powerball jackpot.

The already record projected jackpot for Saturday’s Powerball drawing was pushed up again today. The prize is now set at $800 million, and you can take home $496 million if you chose the cash option.

That is the largest lottery prize ever offered in North America. And Iowa Lottery official says strong sales in Iowa and across the country could lead to another increase again before the drawing.

The largest lottery jackpot until now was a $656 million Mega Millions prize won on March 30, 2012. It was split by three tickets in Illinois, Kansas and Maryland.

The largest Powerball jackpot prior to this point was a $590.5 million prize won in the drawing on May 18, 2013, by a Florida woman.