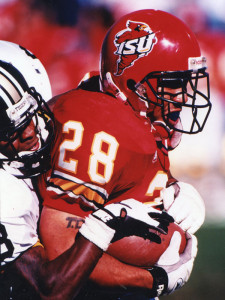 Former Iowa State running back Troy Davis, who ran for 2,000 yards in back-to-back seasons, is one of 16 players and coaches announced as the 2016 class of the College Football Hall.

Davis shattered almost every school rushing record in his three-year tenure with the Cyclones (1994-96), earning the distinction as ISU’s only two-time first-team consensus All-American and the school’s only player to be invited to the Heisman Trophy ceremony twice. He finished second to Danny Weurffel (Florida) in the 1996 Heisman Trophy race.

Davis saw little action until Dan McCarney took over as Cyclone head coach prior to Davis’ sophomore year. McCarney got Davis to stay at Iowa State and built the offense around him.

“Troy rushed for 2,000 yards in back-to-back seasons and still nobody else has done it,” McCarney said. “All these years have passed and nobody has done it two years in a row. That’s pretty amazing. I was a part of the Iowa State family for a number of years and I was so lucky to be able to witness Troy do what he did.”

“This is the highest honor in all of college football and he was the main subject in one of the greatest chapters in the history of Iowa State football. As we worked to lay our foundation for future success, there was no chance we could have done it without Troy Davis. He brought respect and honor to our program. He is so special. I have been around a lot of great teams and I have still never seen another player like Troy Davis,” according to McCarney.

Davis rushed for over 130 yards in all 11 games in 1996, including a school-record 378 yards vs. Missouri, the third-best rushing effort in NCAA history at the time. His 2,185 yards rushing as a junior is the third-best season total in NCAA history in an 11-game schedule that is topped only by Barry Sanders of Oklahoma State (2,628) and Marcus Allen of USC (2,342).

Davis left ISU after his junior season and was selected in the second round of the 1997 NFL Draft by the New Orleans Saints. He played three seasons with the Saints before switching to the Canadian Football League (CFL). He emerged as one of the top backs in the CFL, racking up five-straight 1,000-yard seasons in the pass-happy league.

Davis was inducted into the Iowa State Athletics Hall of Fame in 2007. His brother, Darren, currently sits second all-time on the Cyclones’ career rushing list behind Troy.