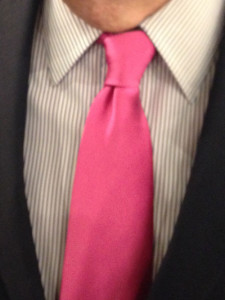 Governor Terry Branstad’s pink tie in honor of the first female Speaker of the Iowa House.

Iowa Republicans held a breakfast pep rally early this morning in a Des Moines hotel ballroom to mark the beginning of the legislative session.

“I have never been more enthused or excited about the opportunity we have in 2016,” Governor Terry Branstad said.

Branstad was in a celebratory mood, wearing a pink tie today in honor of Linda Upmeyer. Upmeyer will formally become the first female speaker of the Iowa House shortly after the legislature convenes this morning.

“It’s no surprise to any of us that it’s Republicans that are proving that the glass ceiling is easy to break. We can do it. We’ve done it. We shouldn’t be surprised because we are the party of opportunity,” Upmeyer said this morning.

Upmeyer is a Republican from Clear Lake who’s been in the legislature 15 years. She replaces Kraig Paulsen, a Republican from Hiawatha, who announced in August he would step down as House Speaker and not run for reelection in 2016. Lieutenant Governor Kim Reynolds, a former legislator picked by Branstad in 2010 to be his running mate and she was there this morning to tout Upmeyer’s elevated role.

And Reynolds, who is expected to run for governor sometime in the future, would be Iowa’s first female governor.