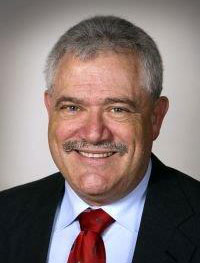 Governor Terry Branstad isn’t calling for a hike in Iowa’s minimum wage this year, but he isn’t ruling it out either.

“I’m going to reserve judgement on that as I do on other issues, seeing what form it takes,” Branstad says, “and what kind of impact it would have on the Iowa economy.”

“But we have talked a great deal about making sure we have a trained workforce to fill the jobs that are around the state,” Upmeyer says. “…We need to recruit more folks to Iowa at the same time.”

“Today too many families are working hard with one, two and even three jobs but are still not getting ahead,” Smith says. “Their wages simply aren’t keeping up with the cost of food, medicine and child care.”

Branstad, a Republican, notes that he did sign a bill back in 1990 that raised the state’s minimum wage above the federal rate.

“But I also am cognizant of if you raise the minimum wgae too much you actually destroy jobs and we don’t want to do that,” Branstad says.

Senator Tom Courtney, a Democrat from Burlington, predicts Democrats in the Iowa Senate will pass a bill raising the state’s minimum wage.

“The general population feels we need to have a minimum wage increase,” Courtney says.

“He’s pretty good at letting us think he’s going to sign something and then not sign it, so I wouldn’t be surprised to see that again,” Courtney says, “but if he wants to tell Iowans that $14,000 a year is enough to raise a family on, then he can tell them that.”

Iowa’s minimum wage is currently the same as the federal minimum wage — $7.25 an hour. Last year Democrats in the Iowa Senate voted to raise it by a dollar an hour, but the bill stalled in the Republican-led Iowa House.

Neither Branstad nor legislators appear interested in barring Johnson County from enacting a minimum wage rate that’s higher than the state’s.