You are here: Home / News / ‘Newsies’ musical set to debut in Iowa 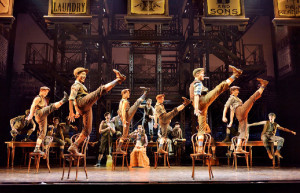 The Broadway production of “Newsies” makes its Iowa debut tomorrow night, its only stop in the state on this national tour.

Actor Stephen Michael Langton, who plays the role of Davey, explains the focus of the Tony Award-winning musical.

“‘Newsies’ is about the newsboy strike of 1899 that took place in New York City over a period of two weeks,” Langton says. “A bunch of orphaned and homeless kids banded together to form a union to bring down the most powerful men in the city at that time, Joseph Pulitzer and William Randolph Hearst.”

The publishing titans tried to raise distribution prices at the newsboys’ expense and the young men found a way to work together and fight back. “The story is something that anyone can get behind, it’s your classic underdog story,” Langton says. “It’s a story about rising up to the challenge, breaking expectations, banding together to topple the opposition, the things that stand in front of us every day that we’re used to beating us down.”

Disney produced a movie called “Newsies” in 1992 and this stage version of the story includes seven new songs. Langton, a native of Dallas, Texas, is on his first national tour and notes most of the 16-member cast is comprised of young men. “I think our youngest cast member is 18 as far as the actual boys, the newsies, are concerned,” Langton says, “and then, I’m 24 and our oldest newsie I think is 30.”

The show runs Tuesday through Sunday at the Des Moines Civic Center.