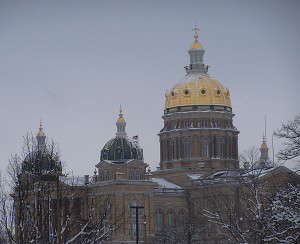 The 2016 Iowa legislative session gets underway today, with difficult days ahead as lawmakers face a tight state budget.

Over the past few years the partisan squabbling among legislators over spending on public schools has been difficult to resolve.

Republican Governor Terry Branstad is aiming for a 2.45 percent boost in general state support for the school year that starts this fall.

“It’s not going to be easy,” Branstad said last week during an annual legislative seminar organized by the Associated Press. “It’s going to be a real stretch.”

“The biggest key to economic growth in this state is to make sure people have the skills for the jobs that are out there,” Gronstal said during the AP forum.

“The state’s economy is strong and is growing. There is no economic emergency, but we will certainly have to focus on priorities,” Upmeyer said.

And there’s this complication: Republicans and Democrats already disagree on how big the overall state budget can be next year.

The Iowa General Assembly is scheduled to begin its 2016 session this morning at 10 o’clock.