You are here: Home / Health / Medicine / Flu cases increase across the state 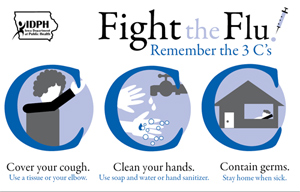 The medical director at the Iowa Department of Public Health (IDPH) says flu activity appears to be heating up as the temperatures dropped in the state.

Doctor Patricia Quinlisk says the flu outbreaks here have gone from a local to a regional spread. “December was quite warm, and the flu really likes the cold temperatures. So, it really got off to a really slow start compared to a typical year,” according to Quinlisk. “But we’re now really seeing the flu (cases) come up. We’re having a lot more people hospitalized, we’ve had a couple more deaths reported to us, we’re seeing more outbreaks, and we are seeing  more flu in other parts of Iowa that we hadn’t seen flu in before.”

Quinlisk says the flu can be fatal, especially to groups like the very young and the elderly, who are more susceptible. “We’ve had four people die directly of. The number of people who got the flu — and then got pneumonia and then died — those we haven’t calculated yet,” Quinlisk says.

“So far this year the match between the strains that we’re seeing going around and the strains in the vaccine are a very good match — unlike last year,” Quinlisk explains. “So, this year every thing points to the fact that this vaccine should do a pretty good job of protecting us from the flu.”

If you haven’t gotten the flu vaccine, and think you may be coming down with the flu, Quinlisk says you should check with your doctor as soon as possible.

“If you do it within about 24 to 48 hours after the onset of your symptoms, they can prescribe for you an anti-viral medication that will prevent you from having as much illness, and as serious an illness,” Quinlisk says. “Not it’s not a miracle drug  — it’s not like the next day you feel perfectly well — but if you were destined to be sick for say seven days, maybe you’ll only be sick for five or six days. And you are less likely to go on to having complications of the flu — such as pneumonia.”

Quinlisk says you can still get a flu shot now and be protected.  And she stresses again some simple things to prevent the spread of the flu. “Contain your cough, keep yourself at home if you are ill, and clean your hands. That will go a long way toward not only preventing the flu, but a lot of other viruses that go around this time of year,” Quinlisk says.

Contact your health care provider or local health department to find out where you can get the flu vaccine  in your community or use the Flu Vaccine Finder at www.flu.gov.