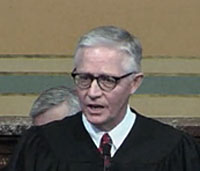 The Chief Justice of the Iowa Supreme Court spoke about racial disparity and human trafficking today  during his annual update on the court system.

Chief Justice Mark Cady told lawmakers and the governor he is pleased with their response after he highlighted the issue in his State of the Judiciary address last year. Cady says the court system has been working on its own efforts to make changes.

projects seek to eliminate racial disparity in the juvenile justice system and its adverse consequences to our state. “

He says the Georgetown pilot project in Johnson County has reduced school referrals to juvenile court by 61 percent. Cady says a lot of work is being done, but more remains. 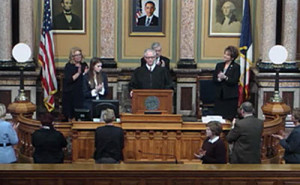 Chief Justice Mark Cady during his State of the Judiciary speech.

The state’s top judge also talked about human trafficking. “We can no longer view human trafficking as a problem reserved to major cities in America. It exists as a dark underworld in many communities across Iowa and is associated with some of Iowa’s most iconic places and events,” according to Cady.

He says the state has to continue efforts to combat the crime. “There is no justice when children are abused and exploited. A prompt, comprehensive, and coordinated effort is needed to identify victims of human trafficking and provide the services and protection they need,” Cady says.

He says he’s encouraged and grateful for the response to this problem from the governor, lawmakers as well as state and local law enforcement. The court system is working to better deal with the victims.

Cady has been the chief justice of the Iowa Supreme Court since 2011.