You are here: Home / News / ‘You have more power than you realize,’ Bush tells Iowa Republicans (AUDIO) 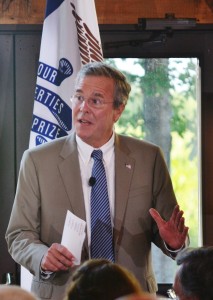 Republican presidential candidate Jeb Bush this morning said it’s up to Iowa Caucus-goers to decide what the “conservative cause looks like” in the future.

“You have more power than you realize,” Bush said. “Will it be a hopeful optimistic message, the Reaganesque message that is timeless, or are we going to change the philosophy to be angry, to be divisive?…That’s up to you.”

Bush spoke early this morning at the Westside Conservative Breakfast Club, a frequent stop for GOP presidential candidates. Bush told the crowd during an eight-minute speech that “America is better” than Republican front-runner Donald Trump.

“America’s the most extraordinary country in the world,” Bush said. “We have to apply our conservative principles in a hopeful, optimistic way and that’s what I got to do when I was governor of the state of Florida and that’s why I have laid out the most detailed plans to take conservative principles that all of us in this room believe in, to make our country move up again.”

According to Bush, Trump’s “first impulse” is to try to divide the country rather than build consensus.

Bush spent most of his time at the event answering questions from the crowd and half of the questions related to Trump’s signature issue: immigration. Another man asked Bush point blank about the “Trump effect” in this year’s election.

“You want me to go into Trump? I’m ready to have him,” Bush said, drawing laughter from the crowd. “Everybody else is in the witness protection program. I’m the only guy that wants to defend the conservative cause against a guy who’s not a conservative.”

Bush cited Trump’s past support for a single-payer health care system and an idea Trump floated back in 1999 to pay off the federal debt: a one-time, more than 14 percent tax on the assets of Americans with a net worth of more than $10 million.

“I mean, name another politician that would have the gall to suggest that we should ex-propriate people’s net worth as a solution to anything. He’s not pro-Second Amendment. He had strongly held views. He now says: ‘Well, I was from New York.’ Who cares where you’re from, man?” Bush said. “…He’s never been a consistent supporter of the Second Amendment. I’ve got an A+ rating from the NRA. Period. Over and Out.”

Bush said there’s a “legitimate reason” why Americans are angry and anxious, but Bush argues simply preying on that anger won’t fix things in Washington if the next president doesn’t have “concrete plans.” Larry Hassman of West Des Moines likes Bush’s stand on immigration.

“I’m with him on that,” Hassman told Radio Iowa even before Bush spoke. “I think there’s a lot of good things that can happen if that’s done right. Not doing anything isn’t a good thing I don’t think.”

Hassman plans to attend the Caucuses and has narrowed his choices down to Bush and Florida Senator Marco Rubio. Dot Hassman, his wife, hasn’t chosen a candidate yet either.

“I think there’s a large majority that is really undecided and won’t decide ’til they get to the Caucus,” she said. “It’s what I’ve done most years.”

A Bloomberg Politics/Des Moines Register “Iowa Poll” released this morning found 56 percent of likely Iowa Caucus-goers haven’t settled on a favorite yet or could change their minds before February 1.