You are here: Home / Health / Medicine / Waukee parents talk about son’s suicide in hopes others will seek help 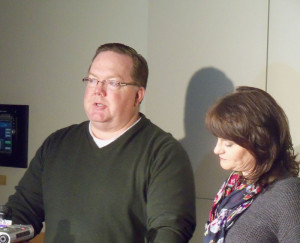 The parents of a popular Waukee high school student who committed suicide this past weekend spoke with the media Wednesday in hopes they can help others. Dan Lienemann says his son Drew took his own life Saturday and was taken off of life support on Monday.

“We want to encourage anyone who is struggling with thoughts of suicide to reach out for help immediately. Seeking help is not a sign of weakness, but a sign of strength,” Lienemann says. Drew Lienemann was senior who was an all-around athlete and captain of the Waukee football team. His dad read from a passage in his prayer book in which Drew said he was lonely. 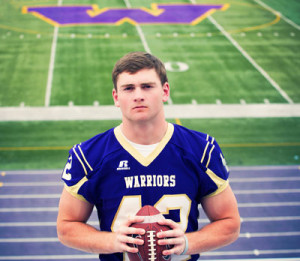 His mother, Wanda, says they had no signs that their son was considering taking his own life. “You know Drew was just a really quiet kid, I imagine most 18-year-olds don’t really talk a lot ….this was a surprise, no we did not. We think his actions were very impulsive,” Lienemann says.

Wanda Lienemann says her son was always helping others, and since his death they’ve heard form many students and friends about the things he did for them. She hopes others will learn from his death that there are times when you need to reach out to others for help.

“You know everybody goes through this at some point in time, a lot of kids do, and I think a lot of kids just don’t want to reach out, they are either embarrassed or they may say to a friend ‘hey I’m feeling kind of low,'” she says. “I just hope that through this that maybe kids would understand that you’ve got to grab ahold of somebody. You’ve got to really talk to somebody — especially your parents — they are the ones who love you the most. This is such a tragic thing, I would hate for another family to experience this.”

Drew Lienemann had agreed to donate his organs when he got his driver’s license, and doctors were able to harvest his organs for donation. Dan Lienemann says it does help to know that part of their son will help others. “It’s a continuation of the way he was trying to live his life here. He truly did serve other people and it does bring comfort to some degree that he is still serving other people through the gifts that he is able to provide through his organs,” Lienemann says.

The Lienemann talked with the media at Mercy Medical Center in Des Moines where their son had been treated. Doctor Sasha Khosravi did not treat Drew Lienemann, but says suicide is the leading cause of death in Iowans age 15 to 34. He says those who consider suicide think no one cares about their problems.

“When you are feeling lone, you are feeling down, there as a sense of isolation, a sense of nobody understanding where you are at. A sense of loneliness,” Khosravi says. “It’s hard to reach out during those times because you feel like noone can relate to you. One of the important messages is, obviously people care, people are there to listen.” He says teens can be susceptible to thoughts of suicides because of their development.

“It’s a time where you are trying to find your identity, your autonomy. Your sense of self and what you tie yourself into is sports, relationships, academics,” Khosravi explains. “And sometimes when you fail, or you feel like you’re failing, you feel like the world is crumbling, you castrophize things. The brain is not developed unfortunately yet, which leads to impulsivity and rash decisions.” Doctor Khosravi says there are things you can do.

“If you have a friend who is struggling, let their parents know or let someone else know,” Khosravi says. He says there are lots of resources to help people, as he says the person’s feeling that no one cares or that they are a burden has to be changed. Drew Lienemann leaves behind his parents and two sisters, Rachel and Rebecca.

If you are considering suicide, you can get help by calling National Suicide Prevention Lifeline: 1-800-273-TALK (8255). If you are interested in organ donation, go to IowaDonorNetwork.org.