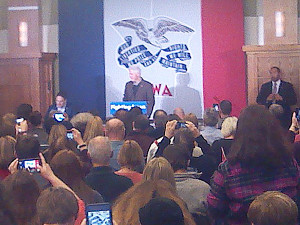 Former President Bill Clinton told a crowd of about 400 in Sioux City today that his wife is the Democratic presidential candidate best equipped to face the Republican nominee in November.

“I do not believe there is another figure in American public life who could have gone through the 11 hours of that Benghazi hearing and stood up to them and put them in their place,” Clinton said, to applause.

Polls released this past week indicate Bernie Sanders is gathering momentum in Iowa. The Clinton team is bringing in a crew of women who’re U.S. Senators to campaign for Clinton in Iowa this weekend. Former Secretary of State Madeleine Albright will be in eastern Iowa for Clinton, too. Bill Clinton is on a two-day tour with stops in Sioux City, Marshalltown and Coralville today. During his speech in Sioux City, Clinton didn’t mention Republican front-runner Donald Trump by name, but he did ridicule Trump’s signature issue.

“Vote for me and I’ll build the wall and the Mexicans won’t come in and take your jobs anymore. The problem with that is do you know what the net in-migration from Mexico has been in the last five years? Zero,” Clinton said. “Why? Because they build 140 tuition-free universities. They produced 100,000 engineers last year…and they want to stay home, where they grew up.”