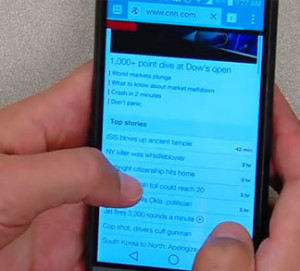 Law officers in western Iowa are reminding everyone the importance of keeping cell phones charged with GPS locators on while traveling in cold weather.

Woodbury County deputies found a missing Sioux City woman in the snow in a farm field near Moville Tuesday through the GPS coordinates on her phone.

Woodbury County lieutenant, Tony Wingert says the cell phone helped save 24-year-old Shaniqwa Hayes’ life. He says leaving your cell phone on and having it hooked up to a charger in you car “that will help greatly, immensely, save lives, because law enforcement can use it to locate that cell phone.”

Wingert says the cell phone can still be tracked even if you aren’t able to use it to call for help. “If you don’t have coverage…the cell phone towers will still be able to locate you so law enforcement can get there to help you,” Wingert says. Hayes remains hospitalized in Sioux City. Her family has asked that her condition not be released.